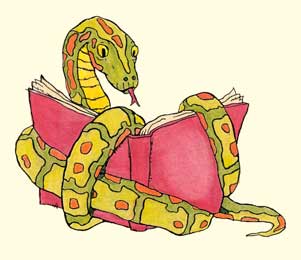 I realized with the first two reads of the year, I have an accidental theme going on: reptiles in my fiction! With Swamplandia!

it was alligators; then there is a snake in The Burn Palace: A Novel

. Our upcoming book club read is set in Texas, so I wonder if a lizard will figure into the plot.

That got me wondering how many of my past reads featured reptiles, so I did a quick search. Snakes are by far the most common reptiles to show up in my book reviews and summaries. Going back in time, I see there were significant snake scenes in:

As for alligators and crocodiles, there is only Swamplandia!

that I can recall. There may have been a crocodile in The Poisonwood Bible: A Novel

There are quite significant cosmic turtles in Terry Pratchett’s Discworld series, from which I’ve read Small Gods (Discworld)

and The Dark Tower

series by Stephen King. As for actual turtles, they don’t seem as common, although the Mock Turtle in Alice’s Adventures in Wonderland

I also can’t seem to find any books I’ve read with lizards in them, although there are dinosaurs of course in Jurassic Park: A Novel

by Michael Crichton and The Lost World

Would you be more or less likely to read a book with a snake in it? I’d rather meet one in fiction than in real life, that’s for sure!

Here’s a list of fictional reptiles from Wikipedia and a list of Reptiles in Fiction on LibraryThing, if you’d like to seek out even more reptiles in your fiction.

One thought on “Accidentally reading about reptiles…”