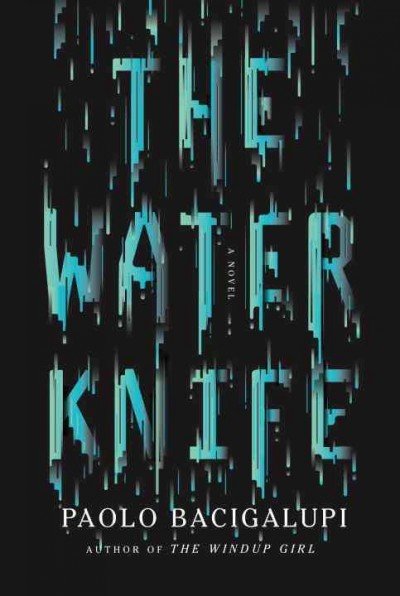 This week I’m recommending The Water Knife by Paolo Bacigalupi. It’s a thriller wrapped up in a dystopia, a realistic and frightening vision of the havoc climate change might wreak on the American Southwest.

In the near future, climate change has brought about drought and constant dust storms in the Southwest, resulting in the collapse of several cities, as well as the state of Texas, and violent clashes among the rest over access to water. Las Vegas is ruled by Catherine Case, head of the Southern Nevada Water Authority, a ruthless and intriguing character who wasn’t in the book nearly enough. Angel Velasquez works for her as a “water knife,” cutting other’s water supplies so that Vegas can have its water. Case sends Angel to Phoenix, a city that is slowly dying, to investigate the murder of one of her undercover operatives. There Angel stumbles into a plot involving double crossers, ruthless California operatives, an idealistic reporter who wants to expose the conspiracy, and a Texas refugee in the wrong place at the wrong time. Everyone is after the same Maltese falcon . . . I mean, senior water rights, which is apparently the key to controlling the Colorado River.

This is a thriller wrapped in a dystopian setting. This near future Phoenix is choked with dust and awash in brutality. Prostitution, torture, gangs, crazy guys with packs of hyenas as pets–all here. California state operatives bomb dams. New Mexicans string up Texan refugees as a warning. This near future vision of the United States is completely unrecognizable and yet seems all too plausible.