Why I’m Done with “Classics” Written by Men 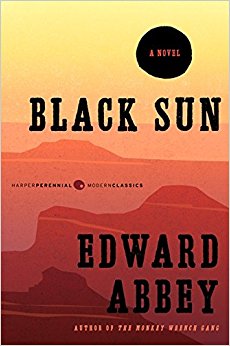 Beautiful books, but beware what lies within…

I just finished reading The Sheltering Sky by Paul Bowles, which reminded me strongly of another lesser known classic novel I read last year, Black Sun by Edward Abbey. Both novels were considered minor classics by authors I had heard of and wanted to read. I bought both books because they came in beautifully designed reissued trade paperback editions. Both Abbey and Bowles know the places they write about intimately–the Arizona desert in Abbey’s case and the Sahara in Bowles’s–and they are particularly well gifted in capturing that strong sense of place on the page. And both books degenerate into an unexpectedly offensive male fantasy.

I found Black Sun to be a cringe-worthy and dated story about an older man–an older, hairy, and unshowered man, to boot–initiating a much younger woman into the ways of physical love while he is spending the summer as a fire spotter on the North Rim of the Grand Canyon. The poor girl is so naive that not only is she a virgin, she doesn’t even know the names for things. Gatlin has to teach her everything, and she proves to be a willing student, ready to try almost anything anywhere. Pages are spent on her physical attributes–her breasts, in particular–and her cute way of dressing, not at all appropriate for camping in the wilderness but conveniently perfect for getting an old man’s goat up. If all that weren’t enough, Gatlin’s friend–who has no reason for being in the book, as far as I can tell–periodically writes him long, sexist letters about his affairs, his wives constantly leaving him (for obvious reasons), and his perverse fantasies regarding college girls and free love. I mean, bleargh.

In The Sheltering Sky, a well-off married couple and their friend go to North Africa–not as tourists, but as travelers–to escape their ennui and find some meaning in their lives. (These people are idle rich; where do they get their money? Bowles never says.) All are poorly equipped for the journey and make extremely bad decisions. It is immediately apparent that the husband, Port, is a selfish prick and we feel no sympathy for him when he becomes ill with typhoid. (He didn’t even bother getting immunized before going abroad.) The traveling companion, Tunner, is also completely self-absorbed and rather adolescent in his behavior. The wife, Kit, is a woman completely without agency, who lets things happen to her and then decides afterward how she feels about them. But even with such a character, and even though we know the desert is slowly driving her insane, it is still almost impossible to accept her actions during the final third of the book, and even more impossible to accept that her feelings about what happens to her as depicted are what an actual woman would feel. She seems to exist solely to depend on men and to feel grateful to them for their existence, willing to let them do whatever and to like it.

Here is where the male fantasy comes in. Both Abbey and Bowles have created women who think and behave as they would like to imagine women would behave, not as women actually do. The net result for this female reader is a growing sense of disgust with the writer. This attitude toward women seems much more common in older novels that have been labeled as “classic” than in contemporary novels by male writers, perhaps because men now realize that women are in fact people and should behave as such, or because those male writers who still depict women this way are no longer lauded by critics. Nevertheless, The Sheltering Sky was the straw that broke the camel’s back (so to speak); it has pretty much turned me off completely on reading classic books written by men. But I guess my education of the white male psyche as depicted in literature is pretty much complete anyway. I did major in English, after all.

By contrast, my discoveries of classic books written by women have been, for the most part, a sheer delight, an unearthing of really good writing that I wasn’t before exposed to, or exposed to only in limited qualities. At this late point in my reading life, it seems a much more sensible use of my time to continue finding and reading the women writers that my education neglected. In the meantime, the Bowles novel sits side by side on the shelf next to the Abbey, waiting to be donated–they seem to deserve each other.