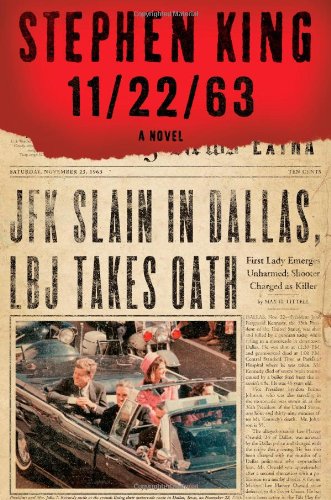 Jake Epping, an ordinary high school teacher, discovers a portal to the past and sets out to change history by preventing the assassination of John F. Kennedy.

Stephen King’s novel, 11/22/63, is not what you might expect from the master of horror. For one thing, it’s not horror. It’s a time travel yarn, a love story, a meticulously researched piece of historical fiction, and a gripping suspense novel. But it’s definitely not horror. It is, instead, something new and different for King, and for those of us who are longtime fans, it’s a welcome change. Yet, King is still doing in this book what he has always done best: He thrusts ordinary people into extraordinary situations and then sees what happens. Which makes for a great story.

The premise of the novel is a big “what if?” What if you could travel back in time? Would you try to make a big change, such as prevent the assassination of John F. Kennedy? What ripples would such a change cause in the present? King gets the time travel stuff out of the way early on, which is a good thing. He doesn’t try too hard to explain how the time travel works, but neither does he wave it away.

The portal to the past is located in the back of a diner in a small town in Maine. It leads back to the same moment: a morning in late summer of 1958. Al, the owner of the diner, discovers the portal quite by accident. He makes many trips to the past for vacations and to buy cheap hamburger before it occurs to him that he might be able to change history. But before he can do so, he contracts a terminal case of lung cancer. So he enlists high school teacher Jake Epping in the cause.

The rules of time travel are simple, at least as Al understands them and explains them to Jake. He can go back and stay in the past as long as he likes, but when he returns, it is always exactly two minutes after when he left. If anything is changed in the past, it stays that way until someone goes back again; then it resets, and any changes made are lost. Of course, nothing having to do with time can be that simple, but that’s part of the suspense of the story.

I believe 1958 must have been a watershed year for King, since one of his most beloved books, It, is also set mainly during the summer of that year. Of course, to make us longtime fans happy, Jake will have to pay a visit to the Derry of 1958, and he does as a test run, to see what happens when he saves someone’s life in the past. By the time he gets to Derry, the events of It are over, but he does meet a couple of favorite characters from that novel. And Derry’s specter shadows him for the rest of the story.

But Jake spends the bulk of his time in Dallas and the small town of Jodie nearby, stalking Lee Harvey Oswald and preparing to intervene in history. He takes his time, because he wants to be sure that Oswald acted alone before he interferes. So he gets a job as a substitute teacher at a small-town high school, and falls in love with the school librarian. Naturally, this complicates his mission.

If I have any criticism of this novel, it’s that it runs a bit long, clocking in at over eight hundred pages. This is a problem with many of King’s books. The middle seems to bog down. But King has done his research, and this novel is also a detailed look at what daily life was like in the years just before the Kennedy assassination, down to the cost of a hamburger. Even if you forget all the time travel business, that aspect alone makes this a wonderful read.

The novel picks up steam as the assassination looms nearer, and as the past — which is obdurate, as Jake says — throws all sorts of roadblocks in his way. We are on the edge of our seats. Will he make it in time? If he does, what will the ripple effect be? Will the future be better, or will the consequences be unforeseen? And if Jake does mess everything up, can he fix it? You will have to pick up the book to discover the answers to these questions.