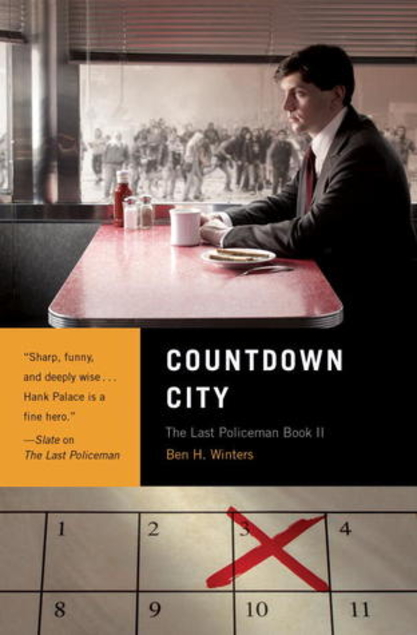 In this follow-up to The Last Policeman, there are only seventy-seven days remaining until an asteroid collides with the Earth; Hank Palace has been let go from the Concord police force, but that doesn’t stop him from taking on a missing persons case and following it to the end with his dogged single-mindedness.

I actually enjoyed the sequel more than the first book in the trilogy, which is a rarity. In The Last Policeman, Winters is just establishing his unusual premise of a police procedural set during humanity’s final days. People are only beginning to accept the reality of the meteor that will impact the Earth, and while there are some suicides and some people going “bucket list,” society is holding together, more or less. Now the clock is ticking down, and everything is starting to come unraveled. The police force has been reduced to thugs on the street, most businesses have shut down, the power is off, and violence has become commonplace. Even though Palace doesn’t have a job, he still takes on a case: finding his former babysitter’s missing husband. He pursues the clues obsessively for no good reason other than it keeps his mind off what’s coming and gives him something to do.

The case leads him back to his estranged sister, who has become part of an underground group hatching a plot to deflect the meteor, and from her to a student commune-utopia established on the University of New Hampshire campus, one of the most entertaining sections of the book. I won’t reveal any more, except to say that as the mystery unravels, civilization is also falling apart all around Palace, until he has no choice but to acknowledge the reality of what’s happening.

I really liked the ending of Countdown City and the set-up for the final book in the trilogy. By combining the traditional crime novel with a last-days-on-Earth scenario, Winters has offered something new in the apocalyptic sub-genre.