Favorite Books of the 2010s: World of Trouble by Ben H. Winters 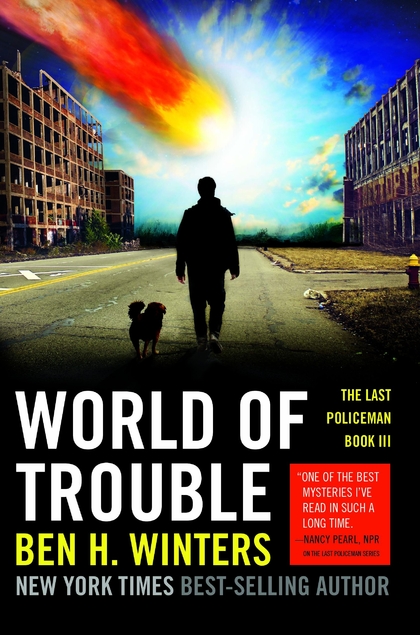 In the final installment of The Last Policeman trilogy, former detective Hank Palace travels to Ohio searching for his sister in the last days before an asteroid will impact the Earth.

I happened upon these books quite by accident, and I’m so glad I discovered this writer. Even as a fan of apocalyptic literature, I don’t think I’ve ever read anything quite like this series. On the surface, these novels follow the tropes of the police procedural, but they are set in the Earth’s final months, weeks, and days before an extinction-level impact with an asteroid, which casts an existential pall over Palace’s sleuthing. Even as we get down to the wire, he remains true to his character, doggedly pursuing leads and documenting evidence, and still wondering whether he’ll ever succeed as a detective.

Palace’s journey takes him to surprising places in the final book, far from his home state of New Hampshire where the first two novels were set. He journeys through an America that seems to have emptied out; the world has become like a haunted house, empty and creepy, with half-seen shadows lurking in the corners. Searching for his sister, Nico, who disappeared with a group of conspiracy nuts convinced they could stop the asteroid in the last book, Palace instead discovers a body in the woods near an abandoned police substation in Ohio: a woman with a slit throat who turns out to be not quite dead. Convinced she is linked to his sister somehow, he follows the clues, which bring him into contact with different people sitting out the last days in their own ways. The story slowly transforms from a detective story into something a lot more existential, a meditation on our species’s purpose and whether it was chance or fate that brought us to this end. This is a moody, introspective story, and despite having a couple of traveling companions (his dog and a grifter also tagging along from the previous book), Palace seems utterly alone, at least until the end.

This series just got better as it went along, and this last book was the best one yet. I can’t recommend these books enough to fans of either crime fiction or post-apocalyptic fiction who are looking for something truly new and different.