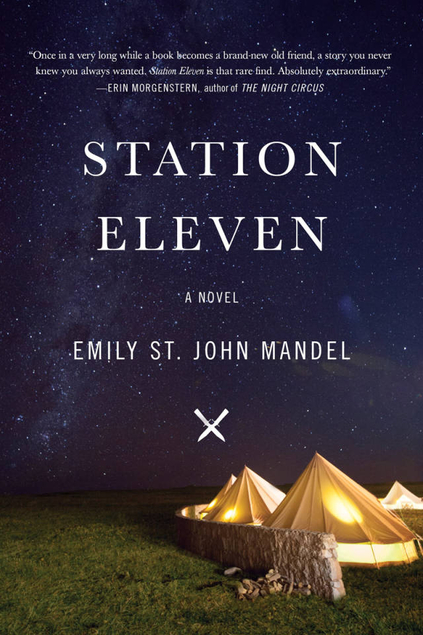 An aging actor drops dead of a heart attack on stage, an omen for a sweeping flu pandemic that will decimate the world’s population within weeks.

Station Eleven does something that I hadn’t thought was possible: it offers something new and exciting in the post-apocalyptic genre. I have read a lot of post-apocalyptic books, and I was getting burned out on them. It seemed like there was nothing new to say about the fall of humanity. But this novel comes forward and defies my expectations. It is a quiet, moving story, elegiac for what is lost, such as technology and modern conveniences, but still hopeful for humanity. It skips a lot of brutality that is the hallmark of post-apocalyptic fiction by jumping around in time from before the pandemic to twenty years after, eliding those first few difficult years and leaving them up to the reader’s imagination. It also omits the tedious details of survival after our global industrial web has failed us, although some details, such as the survivors setting up small communities in truck stops and airports rather than in the houses of the dead, struck me as absolutely believable. As the world has fallen back into a dark age, some of the survivors have created a traveling symphony and acting troupe, which only performs Shakespeare. They travel from settlement to settlement to bring art and music to the post-apocalyptic world because “survival is insufficient.”

This novel is not about survival; it’s about people, particularly those invisible connections that link our lives like webs. By moving back and forth in time, following the strands of the web wherever they might go, Station Eleven gradually builds our knowing of and empathy for these people, both those who survived and those who didn’t, even the rare ones who go bad. All of the characters are linked to movie star Arthur Leander, whose death while playing King Lear opens the book, but there are even more connections, gradually revealed, that show how we all are fundamentally linked to one another. While so many post-apocalyptic books are about losing our humanity, Station Eleven is about reinforcing what makes us human, the fundamental connections that we share.

My favorite of all the characters was Miranda Carroll, Leander’s first wife, who was someone I felt I could know or even could have been, in an alternate life. Miranda is an artist who spends much of her time working on an ambitious project called Station Eleven, a comic book within a book that proves to be immune to the flu pandemic. This motif also reinforces the human connections between us and how those connections are strengthened by the art we make. Even though this book is about much of humanity dying out, it didn’t depress me; it lifted me and inspired me.