12 Books to Diversify Your Reading 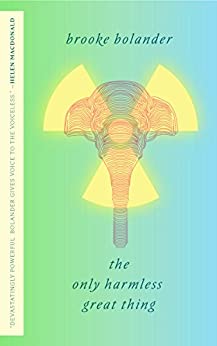 Sometimes we can get in a reading rut and find it difficult to break out of our comfort zones. But it’s a good idea to shake things up every now and then and read an author or a genre we normally wouldn’t consider, if only for the benefit of expanding our view of the world. Especially when we are stuck at home, these books have the added benefit of taking us places we may not ordinarily get to visit. I’ve chosen these books because they take us out of the mainstream in some way, by exploring a different point of view or a foreign locale. They’re all immersive but short reads, a great way to try out a bunch of new writers and see who speaks particularly to you.

1. The Only Harmless Great Thing by Brooke Bolander: The narrative weaves together perspectives of both women and female elephants from prehistory, alternate history, and a possible future, showing how both have been considered disposable but how they gain power from making their own choices about their fates and telling their own stories.

2. The Bone Mother by David Demchuk: A series of vignettes, each narrated by a different person, set mostly in and around the Ukraine, framing traditional fairy tales and mythical creatures in the real world of World War II and Soviet occupation.

3. Amberlough by Lara Elena Donnelly: A spy thriller set in an alternate reality that is essentially 1930s Germany heading into World War II, with a romantic gay leading couple and a heroine who is complex, flawed, and interesting.

4. River of Teeth by Sarah Gailey: Set in an alternate Southern United States where hippos have been imported as meat animals and have gone feral along the Mississippi River–so like a Western, but in the bayou on hippos. This novella also features a nonbinary character.

5. Mapping the Interior by Stephen Graham Jones: One night, a young Native American boy sees his dead father in their house, in full dance regalia. As the boy keeps watch for his father over subsequent nights, he comes to realize that his father’s spirit is not benevolent. This was a beautifully written novella, almost like a long prose poem, that combines fantastic imagery with subtle but chilling horror.

6. Mongrels by Stephen Graham Jones: A coming-of-age story, except in this case the boy is becoming not a man, but a werewolf. The unnamed Native American narrator lives a nomadic life with his aunt and uncle (his parents are dead), who are both werewolves. They crisscross the South, moving on when their nocturnal activities threaten to catch someone’s attention. This is a modern take on the werewolf legend, which expounds on some classic tropes but also creates an entire subculture and history of the shapeshifters.

7. The Lamb Will Slaughter the Lion by Margaret Killjoy: Danielle is a nomadic anarchist who comes to a utopian community in Iowa looking for clues as to why her friend committed suicide. What she finds is that the town has summoned–and many of the residents are now worshipping–a red demon-deer that commands undead animals and rips the hearts of out people who seek to harm others. Of course, the deer has gotten out of control, and Danielle bands with some other outsiders to try to unsummon it. Weird and certainly unlike anything I’ve read before, this novella also features queer characters.

8. Passing Strange by Ellen Klages: A lovely love story about a lesbian couple with a backdrop of San Francisco in the 1940s and much more than a hint of magic. This novella features an excellent cast of women characters.

9. The Changeling by Victor LaValle: There are many things to like about this modern fairy tale: the blending of old stories and very, very new aspects of modern life; the incorporation of issues regarding race and feminism; and the always-appealing quest plot line. The idea of a troll living in a cave in a forest at the heart of Queens charmed me, because it’s the idea that the old monsters–and magic–can still live with us, that modern technology and living haven’t vanquished them after all.

10. The Hole by Hye-young Pyun: After his wife is killed in a car accident and he is paralyzed, Oghi is confined to his bed with only his mother-in-law to care for him. After a while, she begins digging large holes with no discernible purpose in the garden. I think this is one of those horror novels that does its work on you after you finish reading it. The writing felt quite claustrophobic, and the suspense was a slow burn.

11. Vermilion: The Adventures of Lou Merriweather, Psychopomp by Molly Tanzer: Set in an alternate version of the Old West, where ghosts, vampires, and werewolves exist, bears and sea lions are intelligent and talk, and professional psychopomps are employed to routinely usher the dead into the next world. Lou Merriweather is one of them, a Chinese American 19-year-old girl who often passes as a boy, who travels from San Francisco to the wilderness in Colorado in search of some young Chinese men who have disappeared and runs into a lot more than bargained on.

12. The Murders of Molly Southbourne by Tade Thompson: This is very good body horror, about a young woman whose blood generates versions of herself that inevitably become violent, attack her, and must be killed. It’s a horrifying rendition of a reality many of us endure or have endured: the unceasing and often violent murders of aspects of ourselves, both good and bad, so that we can continue to exist.